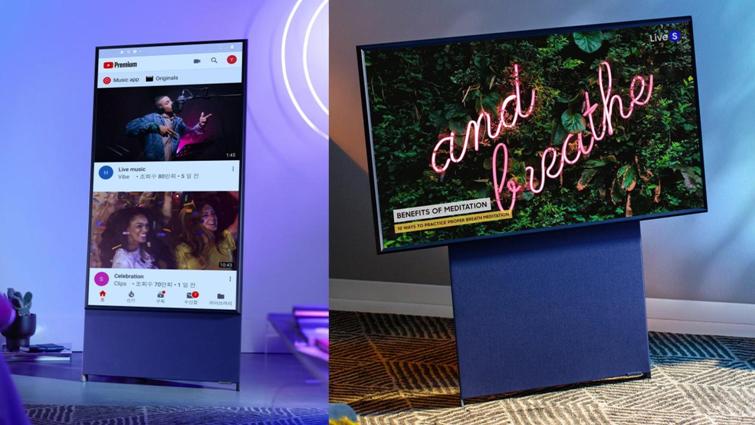 South Korean giant Samsung had introduced its 43 inch 4K Sero TV in January, 2020. The unique feature of the TV is that it has the ability to switch from landscape mode to portrait orientation according to the content the user is watching. The TV has now gone on sale in the US and the UK. Samsung has made an official announcement that the TV will go on sale for $1,999.99 in the United States and £1,599 in the United Kingdom. The TV is relatively small in size but it is still worth as it has a 4K QLED panel.

The Sero TV was launched in Korea and has been available since a while. It was at the CES 2020, when Samsung had announced that it will be launching the TV to the US market as well as other markets globally. Many might think that is the use of the portrait feature of the Sero TV and the answer is it can be better used to show the Instagram stories, Snapchat content, TikTok videos and other videos which are otherwise shot vertically instead of horizontally.

The TV can be more of a blessing for people who own a Samsung Galaxy smartphone. A compatible Samsung phone can be tapped against the frame of the TV and it will begin screen mirroring. As the feature mentions, it will automatically rotate to match with the orientation of the smartphone. On the other hand the iPhone users will have to use a remote, a SmartThings app or a voice command that will manually rotate the TV and will make use of the AirPlay 2 that will stream the content.

The idea might seem good, but such a TV might not be acceptable by many users as many people do not like content which are vertically shot. Practically speaking, there might even be no space for the big and non-removable base of the TV. The TV is now available with selected retailers.