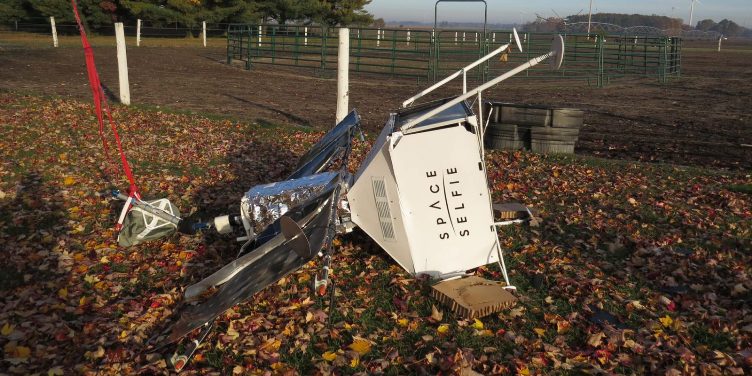 It is not everyday that you wake up in the morning and find a crashed satellite in your front yard. A resident of rural Michigan was baffled when she saw a four-legged machine like object crashed in her front yard. The incident happened on October 26, 2019 when a satellite that belonged to South Korean giant Samsung crashed at the front yard of Nancy Welke, who heard a crash at 8:45 am.

Welke posted on Facebook about the object that she found which was still working with flashing lights. Even 911 was surprised to see the space device that was wrapped in a foil with solar panels and had many plaques of Samsung. Inside the box read, SpaceSelfie which had two large cameras and a Samsung cellphone. Welke in a video interview said that it was surprising to find such an object in her premises and was thankful that there were no horses out.

The space tech had landed with a parachute and was actually a high-altitude balloon or pseudo satellite. Since the space machine seemed to be owned by Samsung, the company confirmed that it was Europe’s SpaceSelfie Balloon that was expected to return to Earth, but the weather conditions led to an early soft landing in a selected rural area. The company said that no injuries have been reported so far and the balloon has been retrieved.

The SpaceSelfie by Samsung was a part of a marketing attempt that would allow the users to send their selfies and then they could be seen layered over real-time shots above the Earth. The Campaign by Samsung was launched during an event in London by model Cara Delvingne, who had taken the first picture. The participants could get a chance to upload their pictures to a website so they could see the pictures displayed on the screen of the Galaxy S10 5G on the balloon. The recent attempt is a proof that Samsung has never shied away from attempting something innovative.