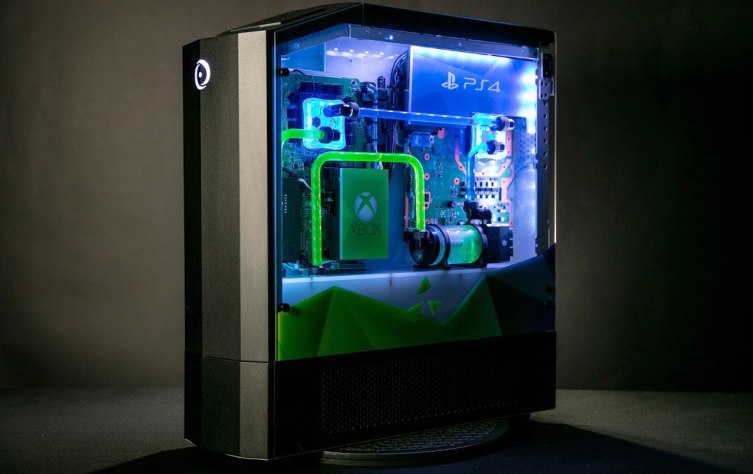 Tech generation keeps updating itself every year and every single time, it leaves the tech enthusiasts surprised and happy. Gone are the days when PC gaming and console gaming came as solo gadgets. CES 2020 in Las Vegas has displayed the Big O which can be bought at the choice of PlayStation 4 or the Xbox One S built in to the machine. The new product has been launched by Origin PC. The device was originally planned as a gaming PC that would have all the three consoles of the current generation built in to the same machine.

But it was Origin PC that came up with an idea to include qualities of both in to one single device which makes sense and is also likely to be popular among the gamers. But here instead of the three consoles, the buyer can put their finger on either the all-digital Xbox One S or the PlayStation 4. The hardware console has the custom Corsair 280 X chassis along with a dual chambered design. Hold on to your imagination if you think that the console might be fitted in to the second chamber. Folks at Origin PC have included PS4 and Xbox one hardware into the device which means that the game console and gaming PC are being served by a common water cooling system.

This becomes clear when the backside of the system by Origin PC is observed properly and has shown that the hardware of the console was taken apart and put together that would fit in to the design of Origin. The best part is that the specifications of the PC are not too complicated as the configuration includes the AMD Ryzen 9 3900X or the Intel i9-9900K CPU and the Nvidia GeForce RTX 2080 Ti video card with up to 32 GN of RAM. The gamers will have the option to have upgrades with SSD storage.