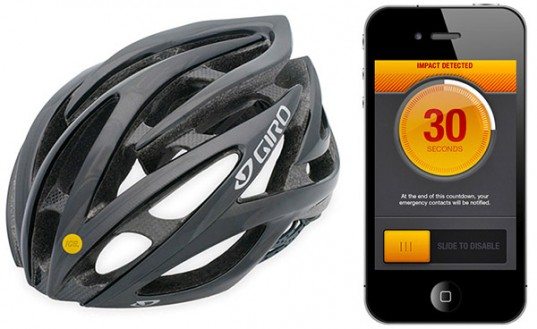 GadgetHerald.com: A new helmet has been designed by an Indian-born chef for top cyclists. The ICEdot helmet connects with the phone of the user and alerts emergency services in case of an accident. The new innovative helmet is expected to hit the market very soon.

The life-saving smartphone app, which can detect a crash and then alert the emergency services, has been designed for the bike riders. The new and innovative application pairs with the help of Bluetooth with a motion detector which is attached to the rider’s helmet and senses the crash.

The new invention has been created by the Oklahoma-based software company ICEdot in the US. The detector has been named as ICEdot (In Case of Emergency) Sensor and can evaluate the severity of the crash depending on the force of the rider’s fall.

Chris Zenthoefer, the CEO of ICEdot said, “The idea came from Biju Thomas, a prominent chef for a lot of top cyclists. He was on a solo ride and crashed and thought if the crash had been any worse, nobody would have know where he was located.” After the accident, the app will intimate the phone to sound an alarm and a count down which can be set between 15 and 60 seconds. If the alarm is not deactivated then the app will contact an SOS service and relay vital information.