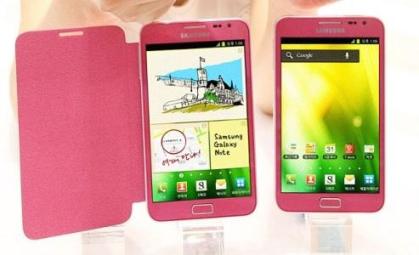 South Korean giant Samsung is all set to launch the upcoming Galaxy Note 3. Recent reports have claimed that apart from black and white, the device will also be available in pink.

The new smartphone is all set to be launched in the first week of September 2013, in black and white variations. Later on, the device will also be available in pink by late October 2013. The information regarding color availability was revealed by a source familiar with the development.

In the meantime, the company has already announced the release of the Note 3, which will feature a 5.9-inch screen. JK Shin, the CEO, back in May 2013 said that the new model is all set to be launched at the IFA trade show, which will be held in Germany in September 2013.

Certain media reports have claimed that the Note 3 is all set to be unveiled on September 4, 2013. If the date mentioned is accurate, then the latest device will take the stage at Samsung’s Unpacked Episode 2 event, with the recently rumored Galaxy Gear smartphone. In recent years, Samsung proved that it is the world leader in terms of smartphone sales and has given a tough competition to its other competitors, especially Apple.