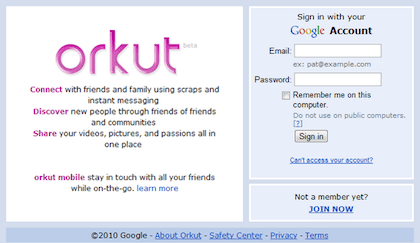 Google to pull the plug on its social networking site Orkut on September 30, 2014.

The service that Orkut Buyukkokten started in January 2004 is finally going to be shut down completely today on September 30, 2014. In 2008, Orkut was one of the most visited webpages in Brazil and India. After today, users will not be able to access their profiles. In a blog post published on June 30, 2014, Google announced that it would be shutting the service on September 30, 2014.

Between 2006 and 2009, Orkut was one of the top social networking website around the world and in 2008, it was the number 1 social networking website in Brazil and India. Google had given users the chance to save all their scraps, testimonials, photos and personal data by using Google’s Takeout tool. The tech giant also said that they would be preserving an archive of the communities, which people can access via Google search.

Users that don’t want their name or post to feature in the community archive could delete their profile before September 30, 2014. As the days drew closer, millions of Indian and Brazillian users went to take a look at their ‘old self’ on Orkut for the last time.

Orkut had been facing severe competition from rival sites like Facebook and Twitter, as scores of its users were heading out to the new social networking websites. While Google+ did not hurt Facebook’s competition too much, it was still a better bet than Orkut.