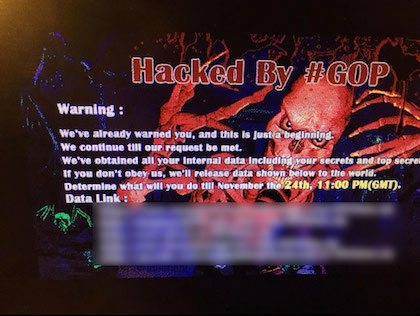 The computers of Sony Pictures have security breached, the executives are blackmailed.

While the rest of the country would be celebrating the start of Thanksgiving, the employees of Sony Pictures were in for a rude shock when the entered their office on Monday, November 24, 2014. The computers at the Sony office were compromised by a group of cyber criminals who call themselves #GOP.

The group breached the security protocols that were set in place and took control of a lot of sensitive information of the company. They were also very vocal about it, when they threatened the firm to comply with their “demands” or they would release the sensitive and classified information to the public.

It is still not clear what this private information is, but knowing how big the company is, it would be safe to say there might be a lot of stuff on it that they would not want to make public knowledge. There are not too many details that have emerged since the attack only took place this morning, what we do know is that the entire office was paralyzed, as hackers took control of the entire computer system.

An employee was quoted saying that the whole organization was paralyzed and no one was able to even make phone calls. An official statement released by Sony read, “We are investigating an IT matter.” The group #GOP also took control of Sony Pictures’ official Twitter account and called out the CEO of Sony Pictures Michael Lynton.

The company was able to regain control of the Twitter account, but as of now, have still not been able to access their computer systems yet.