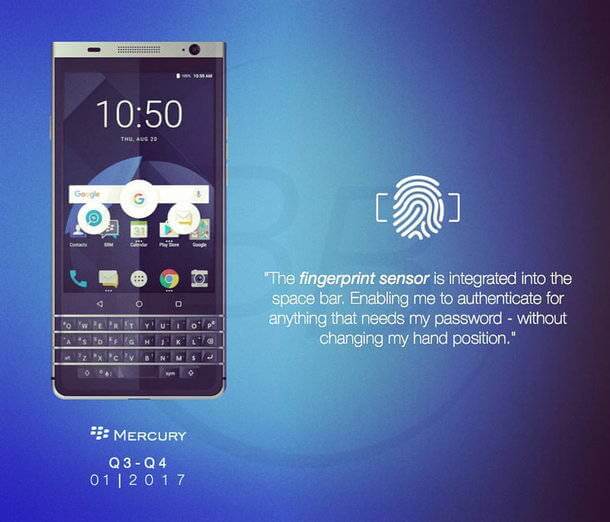 We Have Some Exciting News For Blackberry Enthusiasts!

There have been rumors floating around for a while that have led us to believe that the release of Blackberry Mercury for Verizon is ’round the corner, most likely to happen in the first half of 2017.

This is reassuring news for all Blackberry enthusiasts who were dismayed by Blackberry’s announcement earlier last month to discontinue production of their phones. Blackberry is still a preferred model amongst privacy and security conscious users due to the un-hackable software and encoding provided by the company.

It is believed that Blackberry was working on this phone prior to inking the landmark deal with China based Company TCL. The Canadian company code-named the project ‘Mercury’ and it is believed that this will be the last BB model to be created wholly in-house.

From the images leaked online we have deciphered that the model is expected to have a 4.5 inch touch screen with dual-edge curved display and a full QWERTY keyboard that comes with a fingerprint sensor, embedded under it’s space bar.

Blackberry Mercury is believed to be powered by a Qualcomm Snapdragon 821 processor and a battery, powerful enough to keep it running at full power for 2 day straight!

That’s all that is known about the handset currently.

It’s believed that Blackberry will release the model in the coming months and Verizon will undertake it’s distribution throughout the US. However, neither Blackberry nor Verizon have confirmed or denied these rumors.

Looks like we’ll have to wait and watch on this one! Stay tuned for more updates on the Release of Blackberry Mercury on Gadget Herald.