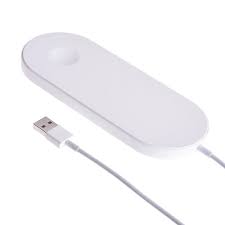 Charging your devices is a major problem faced by people across the globe and if there are two separate charging pads for the iPhone and the Apple Watch, then it becomes even more troublesome. Gadget enthusiasts are waiting for the AirPower Pad by Apple which will allow to charge both the devices simultaneously.

In terms of price, Apple has not yet confirmed the price, but according to rumours, the device might be priced between $99 and $199. While the Apple devices might seem expensive and not everyone could afford it, thankfully, there are much affordable devices introduced by third-party alternatives. Daily Steals, for a limited time is offering the iPM Two-in-One Wireless charging Pad for just $35 shipping included after you apply the discount code RICK35 while checking out.

The above device is exclusive on Cheapstake. If the user orders directly from iPM, then the buyers will have to churn out $49 to $99. Talking about its compatibility the iPM two-in-One Wireless Charging Pad is Qi compatible which means that it can charge about any Qi friendly phone. However, the Watch side works only for the Apple Watch series 2 and series 3. Those who have the series 1 will not be able to take up the limited offer by Cheapstake. The phone side of the device supports 7.5 watt charging for iPhones and 10 watt charging for the Android Phones, which means the charging is going to be fast.

Since the item is fairly new, no reviews have been found. Another point to be noted is that the iPM does not seem to be a Qi certified product as there is no mention about it on the product page. The conclusion is if the user has a compatible Apple Watch and a phone then it is a convenient device to charge both simultaneously. The iPM will also prove to be a great device for the commuters.