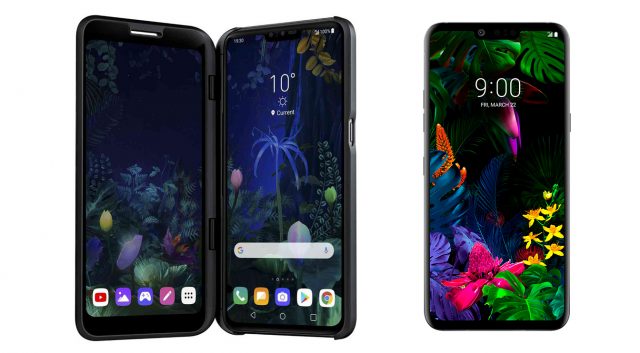 While the Mobile World Congress is filled with folding phones, LG has turned ignorant towards the folding device era and has urging the visitors to consider dual display devices without having the fuss of a flexible screen. The South Korean giant introduced a Dual Screen assessor for the V50 ThinQ 5G. It is a case that has a second screen and works exactly how you would want it to. The new case by LG weighs 131 g and is a little larger and taller than the V50 but is twice as thick as the device.

The case makes use of pogo pins so as to establish a connection with the V50 and also draws power from it so you need not have to charge it separately. There is a second display inside which has a 6.2 FHD + OLED and is slightly smaller than the V50’s 6.4 inch screen. When the V50 device is inside the case, a small icon shows up to ask, if the user wants to turn on the second display also. Once it is activated, the system works and looks like a multi-window approach to Android. The users can work on Gmail and Google Maps open on each side or can also watch video while browsing the web.

There are also a few games that will allow the users to have controls on one side while the game is on the other. LG has claimed that both the screens support multi-window, so you can have up to 4 apps running simultaneously. The idea is to give convenience to the users with a missed opportunity as the big hinge remains in the middle and most of the apps cannot use this set up and one continuos large display like the folding phones in the market do.

Moreover, the combination is bulky to carry around everyday or in a pocket. There are also chances that the V50 battery might drain quickly with the case attached to it if you use it too much.