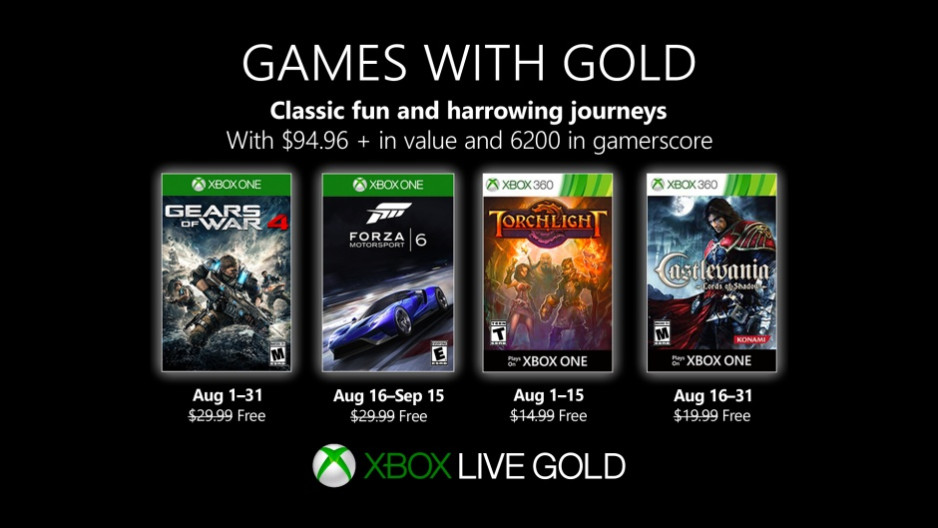 Software giant Microsoft has announced new Xbox titles that will be made available for free to Xbox Live Gold members on August 2019. The announcement was made by Microsoft’s Dean Shimabukuro.

The announcement said, “In August on Xbox One, fight the monstrous Swarm in Gears of War 4 and then experience the thrill of racing in Forza Motorsport 6. On Xbox 360, and Xbox One via Backward Compatibility, explore treacherous dungeons in Torchlight, then prepare to do battle with fearsome beasts in Castlevania: Lords of Shadow.” This month the titles that will be available include Gears of War that costs $29.99 ERP and will be available from August 1 to 31 on Xbox One. In the Gears of War 4, the squad has to discover the source of a terrifying a new enemy and rescue their loved ones after escaping an attack on their village.

Forza Motorsport at 6 $99 ERP will be available from August 16 to September 15 on Microsoft Xbox One and is the most comprehensive racing games of the generation that comes to the gamers way in Forza Motorsport 6. The gamers can start their engines and compete against 24 players, day or night in all weather conditions. Torchlight which costs $14.99 ERP will be available from August 1 to 15 on Xbox One and Xbox 360 that is developed by creators of Diablo and Fate. The gamers can slay hordes of monsters, learn devastating skills and loot endless treasures in the thrilling action- roleplaying title.

Castlevania: Lords of Shadow priced at $19.99 will be available from August 16 to 31 on Xbox One and Xbox 360, where the gamers will be able to play the role of Gabriel. A quest begins across a destroyed world to defeat the three factions of the Lords of Shadow and end their unholy rule. The gamers here take revenge on those who took their fallen beloved and attempt to bring balance back to the world.