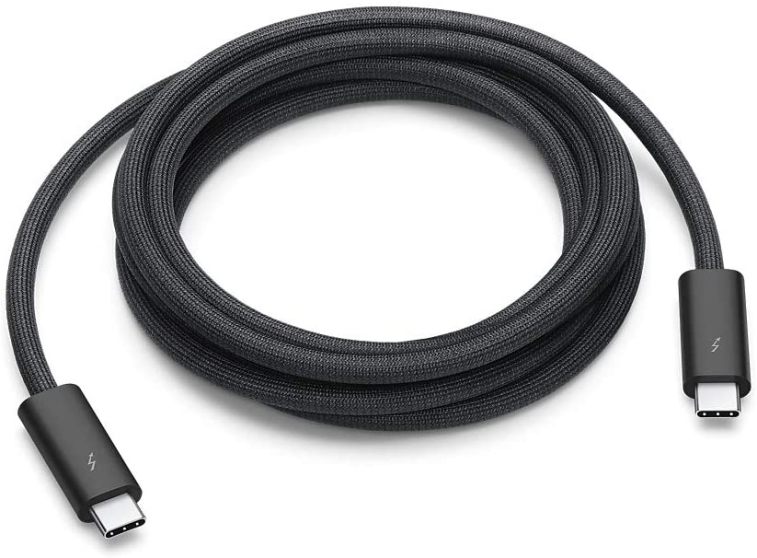 Apple seems to be in mood to bring new accessories for its users. The Cupertino based company has launched the new high-end cable known as the Thunderbolt 3 which is available at its online stores. The Thunderbolt 3 Pro is priced at $129 and it has a length of 2 meters. The cable is black in color and has a braided design and supports DisplayPort output along with USB 3.1. Gen 2 10 GBPS data transfer. However, the data transfers can be up to the standards of Thunderbolt 3 which is 40 Gbps between the compatible devices off-course.

As far as a cable is concerned, it can be classified in the expensive category, but the catch is that there is no competition in the segment that offers better features for a less price. So the cost here seems to be justified. The surprising part is that the cable has gone for sale quietly last month after it was earlier bundled with the Pro Display XDR. There are also online forums that have discussed on why the cable is so expensive.

Apple also sells the Belkin Thunderbolt 3 that is priced at $79.95 and has a length of 2 meters. But it does not support DisplayPort or USB3.1 which means that the cable can be only used for cases where every device in the chain has Thunderbolt 3. If it is still used to plug like the MacBook Pro for the Thunderbolt dock or the external GPU, then the accessory ports will be limited to 480Mbps USB 2.0 speeds along with the USB based accessories.

This clearly states that the new cable only has the additional length and the braiding and the other purpose can be solved with the non-pro 0.8 meter Thunderbolt 3 cable as well and it is priced at just $39. The only thing that is new in the new cable is the longer length.