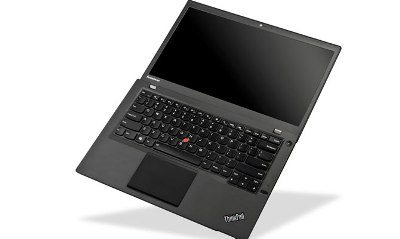 Lenovo has managed to pull a fair share of the computer market on the back of their ThinkPad series of laptops. The ThinkPad design was not renowned for its looks, but the machines themselves were sturdy and reliable. Now the company is taking a different approach to manufacturing these devices and is making them thinner and smaller.

The new ThinkPad T431s series is aimed at providing a slimmer, more manageable version of the ThinkPad T series of laptops. The T431s takes some cues from the X1 Carbon and sports a variety of advantages such as a carbon-fiber top, backlit keyboard, a glass multitouch trackpad and it only weighs 3.6 pounds.

Along with interesting exteriors, the device also comes with 12 GB of RAM, a 14-inch display, 4G LTE and 3G connectivity, all running on a third-generation Core i-series Intel processor. The screen of the ThinkPad T431s can be bent 180 degrees backwards with the help of a special hinge. The machine also supports a 256 GB SSD drive, or a 1 TB hard drive running at 5,400 rpm. Thus it is pretty fast and will not cause a problem while processing large amounts of data.

The T431s will be available from April 2013 at the starting price of USD 949 and will have the trademark red trackpoint at the centre of the keyboard. There is no optical drive on this new machine though, so you would do well to analyse your requirements before going in for one of these.