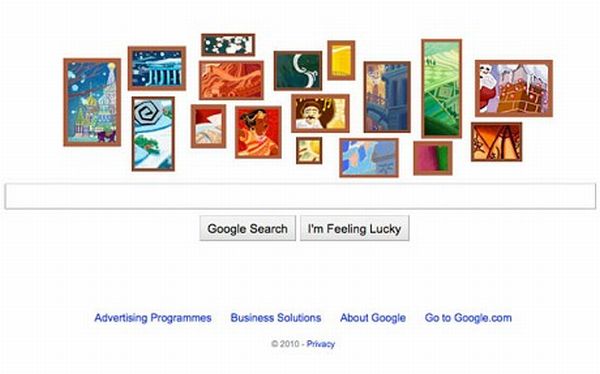 Gadget Herald: Google.com has recently showcased the latest holiday season Google Doodle for this Christmas, and this doodle signifies various holidays and festivities related to the the festival from around the world. Michael Lopez is the man who is responsible for designing this exquisite interactive Google doodle, which will be seen on the Google website this Christmas.

This Christmas Google doodle shows all the major parts of the festival celebrated around the world, and it is a masterpiece. It is not just a doodle, but it is also Google’s very own holiday card this year. This will stay on the Google homepage till Christmas 2010 gets over.

The holiday doodle has 17 interactive portraits which have been developed by Mr. Lopez and his team, by investing 250 hours. Six months in short, was the time used to make this incredibly attractive doodle, and it is certainly one of the most beautiful creations that Google has actually come up with.

Over the past year, Google has come up with some very creative and appealing doodles. including ones in tribute to John Lennon, the discovery of X-rays, the Flintstones 50th anniversary, the 2010 World Cup final, PAC-MAN’s 30th anniversary among several others.