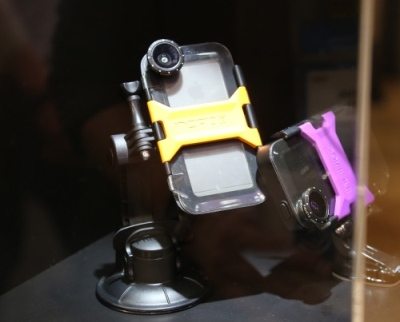 US-based tech giant Apple has managed to make its presence felt at the 2013 Consumer Electronics Show (CES) being held at Las Vegas, USA between January 8, 2013 and January 11, 2013. Apple has not been in attendance at a CES event since the year 1992, but Apple related products dominate the floor space at the event even today.

There is a specific gallery named iLounge, which has been dedicated to Apple-related products at the 2013 CES event. There are a variety of Apple peripherals on display at the iLounge Pavillion including iPod accessories, solar-powered Mac batteries, iPad camera rigs and a variety of cases for various Apple products.

Various companies see the logic in basing their products on Apple’s industry fame. The tech giant has had a commanding presence on the global gadget scene for the better part of a decade and has an ever-growing influence on tech trends around the world. Howard Cheng, who is the director of operations at Just Mobile, said their business plan is to continue to make Apple products just because the company is doing well.

Charles Govin, a Forrester industry analyst, echoes Cheng’s thoughts by coming to the conclusion that Apple accessory manufactures can reach the entire user base for the iPhone, the iPad and the iPod due to Apple’s standardization of their connectors. This is just one example of why tech companies decide to go down the path of making products for Apple devices.

Even though Apple is not physically at CES 2013, they surely have made their presence felt.