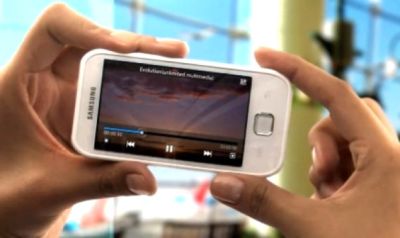 Gadget Herald: Samsung, the South Korean electronics giant, has announced that it will be launching a device that will be a direct rival to the Apple iPod Touch. Reports say that the company will be coming up with this gadget sometime next month and the phone is based on the model of the Galaxy S smartphone.

The new device is alleged to be named as the ‘Galaxy Player’, it will be just 9.9mm thick, and will come with a 4 inch LCD touch screen, and is running on the Google Android 2.2 FroYo. The heart of this device is the 1GHz Hummingbird processor which is quite fast for a device so small, WiFi connectivity is standard.

So what are the features expected in this new Samsung beauty? There are 8GB, 16GB, and 32GB memory storage options, plus a 3.2 mega pixel rear camera and a front facing VGA camera. Critics say that it is exactly the mini variant of the Samsung Galaxy S, just as the iPod is the mini variant of the iPhone — only without the phone option. Extra features on the phone include SoundAlive audio enhancing technology, GPS and Bluetooth 3.0 connectivity, high-definition video playback, a microSD card slot, a 1200mAh removable battery, and access to Android Market and Samsung Apps. This device will make a huge difference in the MP3 market today and especially in the portable device section, because it is going to be first device that will be going head on against the Apple iPod.