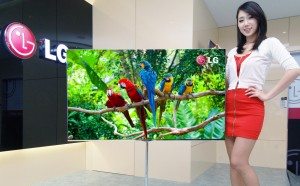 The first OLED TV that was launched last year, in partnership with Best Buy, has also received several price cuts. The new OLED TV has a curved screen so if someone does not want a curved OLED TV, the only option they have is to go with the 55-inch “Gallery” model which is $1500 more than the curved one.

The new model “looks better”, but apart from the addition of WebOS, there is not a very big difference between the successor and predecessor. Confirming this, a representative from Best Buy said, “but aside from the addition of WebOS we can’t see any major differences in specs when comparing the two on LG’s website. Both use LG’s WRGB OLED system and offer passive 3D as well as a panel that’s only as thick as a pencil at its thinnest point.”

The only other OLED TV maker, Samsung, has not come out with an OLED ever since its KN55S9C that came out last year.