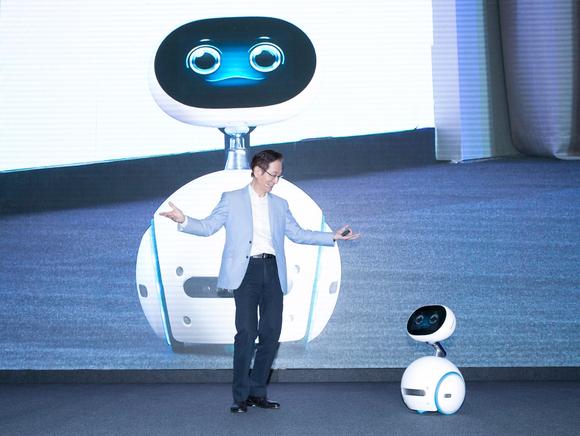 Tech giant Asus unveiled a cute talking robot for home at a press conference in Taipei on May 30, 2016. The little robot has been named as Zenbo and has been priced at $599.
Asus has claimed that Zenbo can work as a personal assistant and can also help look after elderly people or read stories to the kids. The robot is two feet tall and rolls around on wheels. It has a display that shows an animated face and can also be used to make a video call and stream videos.
An interesting demonstration was given by Asus chairman Jonney Shih, who was seen giving the machin voice commands and asking it questions. Shih asked, “Hey Zenbo, is it true you can take pictures”? to which Zenbo replied, “Yes, I can take photographs”. The chairman revealed that the Zenbo can take his picture with the audience at the background after which Zenbo rolled back and took his picture.
The company has not revealed any more details on when it will go on sale. Asus has asked the developers to sign up for a software kit that will allow them to build applications for it. The robot was also able to dim the lights and control other appliances. No technical details were shared by Asus.
Photo Credits: nikkei