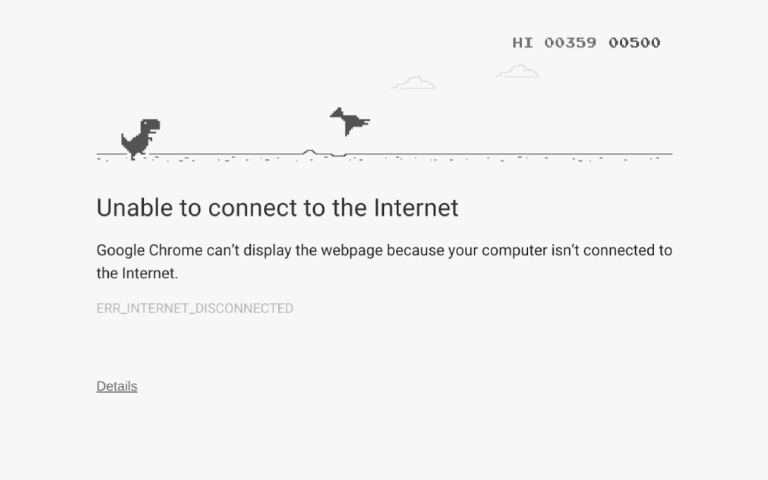 Google Chrome is one of the most widely used browsers in the world. In 2008, the online browser was revealed with the help of a comic book which detailed about the new open source browser. Now that Google Chrome is celebrating its tenth anniversary in September 2018, the search engine has updated and also themed the Offline Dino game.

The mini-game An Easter Egg appears when there is no internet connection and is trying to visit the page. Initially, Chrome displays a standard No Internet page which suggested the users to try checking the network cables, router or modem or asks to Reconnect to Wi-Fi. When the users press the space bar, it begins an 8 bit side scroller with a tyrannosaurus at the upper left corner. A dinosaur starts running at a dessert landscape and the space bar helps hi9m to jump off the obstacles like the cactus and flying birds.

The scrore of the game is displayed at the upper right side of the corner and the browser remembers the high scores for that session. The new birthday edition allows the dino to collect a birthday cake and wears a party cap while the background features balloons. The Easter Egg will be featured for the entire month of September, 2018.

The limited edition of the game will be available on desktop as well as mobile platforms and features retro game sounds as the dinosaur jumps from the hurdles. Being offline on a desktop is always a boring experience but the Android app has featured the offline page downloads since 2017. Taking about the anniversary celebrations, this is just the beginning and Google is already noting that the Material Design refresh is soon going to be introduced in September, 2018. It will be available across all the operating systems with Chrome 69. The browser was first released on September 2, 2018 for Microsoft Windows.