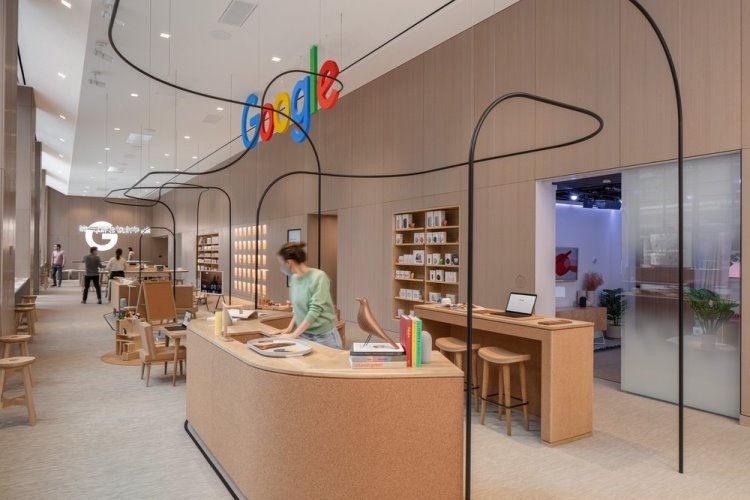 Search engine giant Google has launched its first physical retail store at New York’s Chelsea. The space has been designed by the architecture studio Reddymade that has worked on cork furniture and things that are made of recycled material. The first physical retail store opened its doors on June 17, 2021 and has occupied the entire ground floor at the former Port Authority Building. The popular Chelsea Market is located just opposite of the Google store.

The retail experience has been create by Suchi Reddy of Reddymade in collaboration with Ivy Ross, who is the VP of the design. The design of the store is based on neuroasthetics which is a portion of science that shows how visual aesthetics have an impact on the body and mind. The cork furniture has been done by Daniel Michalik and the ambience has wood paneling that helps to create a serene atmosphere at the main area. The design by Reddymade has focused on putting the visitors at ease to welcome people who need help and also those who are just curious.

Google has assured that it will be offering on-site repair services for the Pixel phones at the store and will also provide product support for all of the hardware devices. The company also intends to provide software support to a certain extent. It will be only for the consumer products and not for the enterprise users. For now not much has been spoken about the first physical Google retail store.

There is surely more in store than just the serene ambience and a note-worthy architecture. So far, the company has only experimented with pop-ups but this is the first time it has ventured in to a physical store. Off-course, the store is also going to have the entire hardware range, Nest smarthome gadgets and Fitbit devices. There are also going to be third party accessories on display along with Google-branded t-shirts and hats.