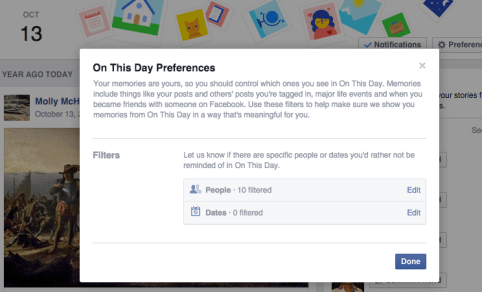 Social networking giant has so far been a great companion for the users to help them to keep in touch with friends and family living apart. The network in March, 2015 had launched a nostalgic feature known as ‘On This Day’ which allows the users to look back to the posts that your shared and were tagged in the same day a year back.
But there are times when you are shown things that you don’t like to see anymore. ‘On This Day’ now has a new feature to filter old memories from people or dates that the user might not want to remember. For instance the memory can be of your ex or of someone who has passed away. The filters will allow the users to emit the memories from certain people and specific days.
A spokesperson from Facebook said, “We know that people share a range of meaningful moments on Facebook — from celebrating good times like a birthday to getting support in tough times like the passing of a friend or relative”. The spokesperson added that everyone can have memories that are good or bad. So far people who use ‘One This Day’ the two filters will be their companion and give them more control over the memories they see.