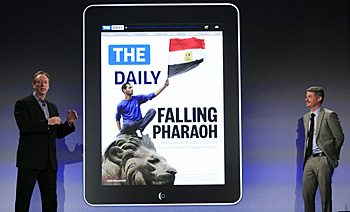 Gadget Herald: The Apple iPad 2 was finally spotted at the launch of Rupert Murdoch’s ‘The Daily’, all the claims of the device being a rumour have been washed out as it is confirmed it officially exists. The device got eyes locked on by some Reuters journalists, and it was noticed it had two cameras. This is the first time in the device’s history that it has been spotted in public.

Many reports on the web stated the device was a rumour or they were just unsure about its launch. There were hopes about the device when it was known that it was featuring dual camera’s. The news regarding the device spread like wild fire on the web, and indeed everyone wants to have the first look at it.

The iPad 2 will be thinner and slimmer compared to the its predecessor, and it is 10inch in size. It is a full touch screen device, having AirPlay features on it, and is expected to launch during first half of spring. The latest Apple iOS will run the tablet, but not to mention the Google Android Honeycomb tablet OS too is in the market, and will provide the device some strong competition.